Last week Rev. Mary Lou Eastmond was a guest preacher at my church. She preached on Philippians 2:1-13.
at 5:20 PM No comments:

The Bondage We Know

Sorry this has taken me so long to post this week, and next week there will not be a sermon posted.

Faith to Walk on Dry Ground

Today we mark the anniversary of the September 11, 2001 terrorist attacks on the World Trade Center, Pentagon, and passenger takeover of the fourth plane that went down in Pennsylvania. I think it is an interesting and slightly morbid ritual to continually mark anniversaries of devastating events such as terrorist attacks. Having been in downtown Oklahoma City on April 19, 1995, I can honestly remark on this as one who does remember an anniversary of a devastating disaster, just not the way the media does.

After the April 19th bombing of the Murrah Building, life changed for many people in Oklahoma. It was rare to find someone who lived in the Oklahoma City Metropolitan area who did not know someone who worked in that building. Most people knew someone who died in the building. Every year, at least on Oklahoma City television stations, there is a memorial service where there is a time of silence, speeches, etc. There is nothing wrong with this, and I believe that in a certain way it is helpful to remember such events in history.

However, I remember the first year I didn't wake up and say, "Oh God, it's April 19th." There was something freeing about waking up like it was any other day of the year, going about happy business of getting kids to school and getting off to work, and then at a later point in the day go, "Oh yeah, it's April 19th." It was as if shackles of gripping fear were removed from my heart and soul.

That is my prayer for those who stop and remember 9/11 from a close and personal distance. Those who were in the immediate area of the attacks, those who lost a loved one or friend in the atttacks, and those who had their understanding of safety and security shaken to its very core because of these attacks.

My prayer for the rest of the country and the world who of course mourn with those people is that they will allow these people to heal in peace. We who watched this on television from another state should not make this about us. It is not about our understanding of these events from a safe and comfortable distance. I think, while never forgetting, it is okay to let these events dwindle to only a blurb on the news, at least until it can safely rest in the history books to be remembered as Pearl Harbor is now remembered...as a devastating event that once happened to us, that we can learn from and grieve over, but not as a media circus that requires lights, cameras and lots of action.

I know this may not be popular with some, and I am not really trying to stir up any arguments. I just want people to know that if you weren't there, while you do feel for those people, and may even take it personally as an American, it isn't the same memories as it is for those who felt the ground move and held out hope during the rescue efforts until at last your worst fears are confirmed. They need to have a year when they wake up and the first thought on their mind isn't, "Oh God, it's September 11th."
at 9:03 AM No comments:

Email ThisBlogThis!Share to TwitterShare to FacebookShare to Pinterest
Labels: Remembering

I have neglected to add Rev. Steve Littrell's blog "Recognizing the Moments" to my list at the right. That oversight has been corrected, and I would encourage you to check this out! His most recent, "a follow-me moment" I think is very well done.
at 10:17 AM 2 comments:

Yesterday, my husband and I went to volunteer at the Red Cross evacuee center in Oklahoma City. He went as a general Red Cross volunteer, and I went in the capacity of a Chaplain and with Oklahoma United Methodist Volunteers in Mission. We were working with other volunteer and government organizations including Oklahoma Department of Health, Oklahoma Medical Reserve Corps, Emergency Management Services Authority, Oklahoma Department of Human Services, the Salvation Army, Baptist Disaster Relief, the various law enforcement agencies and fire departments from neighboring cities and counties, and of course Federal and Oklahoma Emergency Management agencies. I am certain I have left someone out and for that I apologize.

When we arrived that afternoon we were told that we would be doing intake of those who were coming in on buses due at anytime. They had already taken in over eight buses from that morning, and were expecting five more buses, but only one of those actually arrived. When the people were processed, we took information on their family and if they had small children they were directed to a table in which the kids and parents were given matching bracelets in case they got separated. They were issued a cot and given a location in the warehouse to set up their cot and their belongings. They were given food at meal times and there was water and fruit available all the time. What I was most struck with was how smoothly (considering everything) the process went.

Secondly, I was impressed with the people. They had been on buses for on an average of 20 hours after having been evacuated from the homes, some of which had never left their home town EVER in their lives. There was one bus which left Louisiana at 8 a.m. Sunday morning only to arrive in Oklahoma City at around 4 p.m. Monday afternoon, some 32 hours later! Apparently the bus had ran out of gas on the way due to sitting in traffic for long periods of time. Of course these people were exhausted, hungry, and the possibility for bad attitudes could have been there, but really they were just so relieved to finally arrive, I really didn't notice any bad attitudes.

There were people there from all walks of life. Most of them were lower income who could not afford to or were unable to drive out on their own, find and pay for a temporary place to live. Still others probably had some means to do that, but either could not or did not have the opportunity to prior the mandatory evacuation. Some were the elderly men and women, some were young families or extended families, some were single men and women, some were homeless, many were young. The youngest evacuee was just a few days to weeks old having only been released from an NICU unit in Louisiana on Friday before being evacuated on Sunday. That child was bused here, but was later taken to an area hospital.

Children were playing in any available spaces. It is interesting how children can be perfectly normal in the most un-normal of circumstances. Babies were running in diapers with big smiles and squeals of laughter. Small children were looking in wonder at all the strangers wondering around in their midst. Teenagers were being teenagers and walking around talking, shouting out to one another. There was no real disrespect, but what I would call more of a air of social differences, but everyone was courteous and understanding that we were in the midst of a situation that in the best light was nowhere near ideal.

Women who were very pregnant were trying to get comfortable on FEMA cots. One young woman was 38 weeks along and the only thing she wanted in the world at that time was to be able to get to "her people" in Houston. One looked like she was having pains and was stressed.

I saw snapshots of humanity that spoke all on their own. Such as the woman and her infant who, in the midst of the noise and chaos going on around them, were sleeping on a cot face to face with the mother's arm wrapped protectively around her child.

The elderly couple sleeping on cots next to each other, him with one eye opening watching everyone around them. And another couple concerned with whether or not they were going to be able to get to the porta-potties in the middle of the night.

There were the handicapped and the able-bodied, the old and the young, those that live at or below poverty level and those who were in a more middle income range. Below is a picture of a gentleman I referred to as "the suit guy." He just looked lost and I felt so bad for him. (Photo from the Daily Oklahoma. More photos can be found at NewsOK.com.) 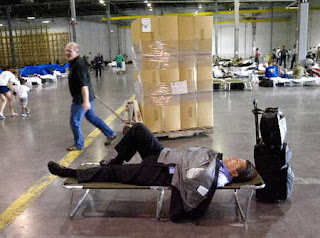 In part that is due to the vigilent efforts of our law enforcement officers which I believe were doing an outstanding job without being oppressive, and part of that is due to the organized way the volunteer organziations were employed and used through the Oklahoma VOAD (Volunteer Organizations Assisting Disasters) agencies, and the rest of it must be due to the goodness that I believe is the image of God in us all that, should we allow, does tend to come out on occasion.
at 8:10 AM 2 comments: