As I shared my photos of streets earlier, I thought I would post some of the other more "artistic" pics of doors. 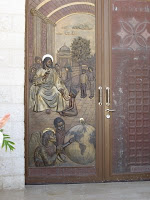 Doors to the chapel at Mar Elias 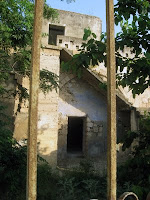 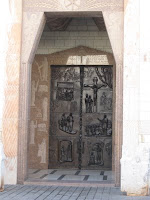 Door to Church of the Annunciation 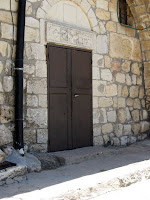 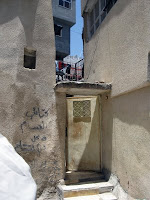 Door in Aida Refugee Camp
at 4:56 PM No comments: 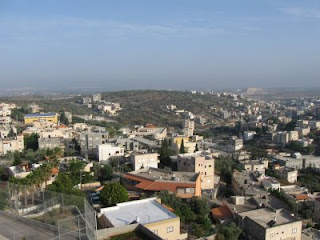 June 4, 2009
This morning I woke early, somewhere around 5 a.m. Not so much because I couldn’t sleep, but because that seems to be when the sun rises here. Before breakfast, Sandy and I went up to the roof to look at the town and school. Wow! What a beautiful view. I realized last night that the landscape is not flat like Oklahoma, but in the dark I really had no idea. The steep drive up to the school could have just been at the school, but no the entire area seems to be on a slant! From the roof you can see the dome of the school’s chapel, the minaret of the mosque, a couple of crosses indicating churches, and pretty much the whole village of I’billin. The word “village” is interesting because when I think of a village, I think of a very small community, not even a town. However, this “village” was bigger than I imagined. It sure beats the “village” where I am currently living.

The breakfast was wonderful, even the coffee which was instant and which I typically do not like, and we were all eager to begin work this morning. I have realized my ignorance with electricity in other countries as the first thing I did was to blow up my blow dryer. Oh well, my hair isn’t the important thing anyway. 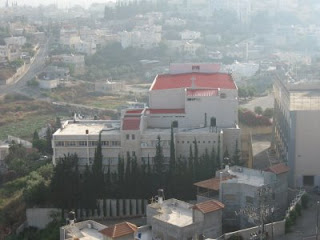 Before we worked, we went on a tour of the chapel and auditorium. The Mar Elias Educational Institution (MEEI) was founded by Father Elias Chacour, a Melkite priest, who had a dream of providing a quality education for the children in the area. He began with a kindergarten, which I found out means ages 3-5, so more of a pre-school and kindergarten. It now has over 2500 students from Kindergarten (3 years) through college. 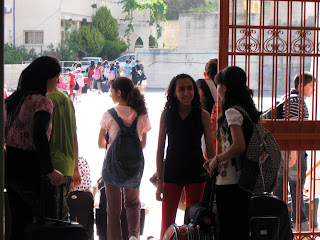 As we were waiting to leave for the tour and the work detail, we were waiting in the foyer of the elementary school. (The guest house is on the fourth floor of the elementary school.) There were children waiting in the parking lot with luggage and we learned that they were going on a field trip for the weekend to Jerusalem. How cool would that be! Can you imagine in 7th and 8th grade your field trip was for a weekend and it was to Jerusalem! 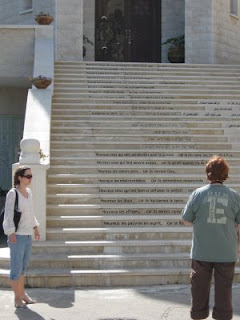 The premise of the school is based on the eight Beatitudes from the Sermon on the Mount, with an emphasis with “blessed are the peacemakers.” The Beatitudes are written on the steps leading up to the chapel. They are written in Hebrew, Arabic, English and French. The chapel is beautiful, but Kathryn, a volunteer at the school who gave us the tour, told us they only use the chapel for special occasions. In 2001 Father Elias Chacour, or Abuna (which means father) was announced to be the recipient of the Niwano Peace Prize. The chapel was built with the monetary award. The symbol on the floor of the chapel commemorates this award. 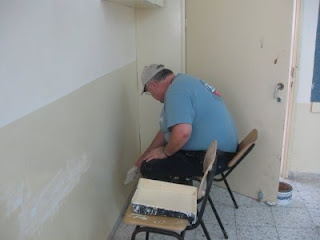 We painted a classroom this morning and accomplished quite a bit. We will finish working on the classroom and hallway tomorrow. While we were working on the classroom, I watched the students as they were on a break through the classroom window. Amazingly enough, they acted like normal teens. Of course, I say this tongue-in-cheek, because I didn’t expect anything different. From the graffiti we were painting over in the classroom, I can say they are pretty much just like American teens in that English was the language of choice for the more “colorful” graffiti!

After lunch and a rest for the heat of the afternoon, we went down to the viliage of I’billin. I’billin is a Christian/Muslim village whose inhabitants settled here from at least three different villages after the Arab dispersal and dispossession of 1948. We were guided by Elias, the care taker of MEEI. Elias is a pretty common name and would be translated as Elijah. In fact the school is not named for the priest, Father Elias Chacour, but for the prophet Elijah. And there is Elias the caretaker, and later there will be Elias the tour guide. 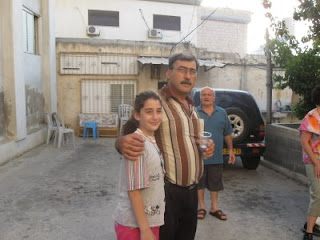 Elias proudly showed us his home town and led us through the streets of the village. He was raised here and still lives in a house that houses his brother and his family, as well as his parents. His sister lives across the street with her husband and his family. It is a pretty tight knit community and everyone was very warm and welcoming. 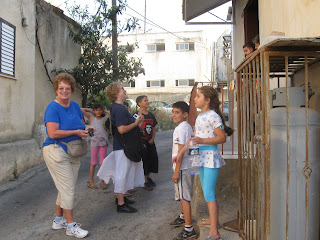 The children were out playing in the streets and would come up to talk to us. We took their pictures and showed them on the digital screen. We saw Elias’ church as well as the local Boy Scout meeting place, which was very interesting. The scout master, we found out was the best man at Elias’ wedding. He was very proud to introduce us to his friends and family. 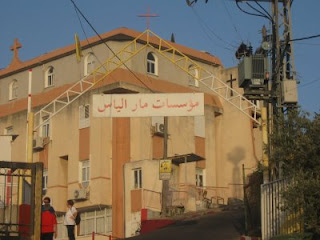 Getting to the village was the easy part. The hard part was going back up the steep hill to MEEI. Once we arrived, we were entirely wiped out. After we had a team meeting with devotions and discussions of what we learned and saw that day, we turned in for the evening.
at 4:27 PM No comments: