What Does an Extra 80 Million Give Us?

There are news reports being released that scientists have discovered that the universe is approximately (because I do not think a nice rounded figure could be exact) 80 million years older than previously thought.  I am interested in these types of things although I tend to treat some of these reports with a healthy bit of skepticism--the same healthy bit of skepticism that I tend to treat religious findings of proof as well.  But in spite of my skeptic nature, I am still curious about these scientific discoveries.

Unfortunately, I have a terrible tendency to read comments on news reports.  I know I shouldn't, but I just keep reading down the page and see all the comments.  Now, as part of my personality, I want to believe in, have faith in, humanity...then I read comments, which tend to irritate me in ways that they shouldn't but they do.  Today when I read the comments on this particular post, I was saddened by what I read.  One of the comments said, in essence, 'Christians do not believe in science, are superstitious and hate everybody.'  That made me sad because what followed were comments by 'Christians' proving the original statement to be absolutely correct.

So, as I thought of the enormity of the original post, that our universe could possibly be even older than originally believed, I am awed by the thought of a universe so vast with so many possibilities.  This does nothing to diminish my faith in a divine being.  If anything, it just makes God that much more wondrous, and humanity that much smaller.

That is generally what resistance to new findings is about any way.  It isn't only Christians.  There are those in other faiths as well, and even some sciences, that for them a new finding means what they once believed in crumbles.  It is ego, not faith or science, that is the culprit here.  It is the human tendency toward self and control that causes wars and problems with others.

My only sorrow is that the discovery of an extra 80 million years of the universe does nothing to help humanity be better - or maybe it will, but is yet to be seen.  I do not think the answer lies in destroying or criticizing people of faith or science.  I do not see faith and science as counter to one another, too bad they have been set at odds so thoroughly that one cannot learn from the other.

I hope sometime in the next 80 million years, or however, long science believes our universe has left, that humanity--both those with and without faith--will eventually quit trying to be the center of something we don't even understand fully, nor can we probably ever fully know .
at 4:02 PM No comments: 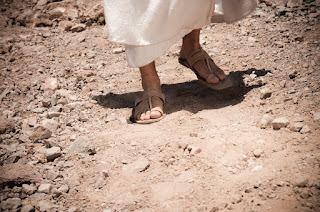 This Lent we are walking with Jesus along the way.  The sermon the Fourth  Sunday of Lent,  March 17, 2013 on John 4:3-42 takes us to Jacob's Well in Samaria where Jesus has a conversation with a woman about living water.  Blessings as you journey along the way.

He Tames the Wind and Sea

This Lent we are walking with Jesus along the way.  The sermon the Third Sunday of Lent, March 10, 2013, on Mark 4:35-41 takes us to the middle of the Sea of Galilee where his disciples discover there is more to this Jesus than meets the eye.
Blessings as you journey along the way.
at 7:03 PM No comments:

He Taught as One With Authority

This Lent we are walking with Jesus along the way.  The sermon the Third Sunday of Lent, March 3, 2013, on Matthew5:1-2, Matthew 7:24-29 takes us to the mountains where he taught the people.
Blessings as you journey along the way.