On April 19, 1995, I had gone to work at a law firm on 7th and Shartel in Oklahoma City.  My niece was having surgery at Presbyterian hospital so my mom and sister were with her.  My son was home sick from school, so my dad was watching my son and daughter at my house.  I left for work and it was a bright, sunny day.  I lived east of Oklahoma City, so I would avoid the craziness of the interstate and go down streets to get to my office building.  Specifically, I would go down 5th Street.  I drove past the buildings of downtown Oklahoma City bathed in the glow of the early morning sun enjoying the morning. 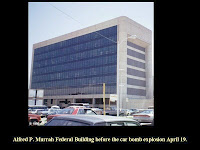 I always thought Oklahoma City was so beautiful.  It was clean and had some great architecture.  I am a city girl, and I never felt unsafe there.  I worked downtown for most of my adult life up to that point.  I drove through the streets as I did every day.

I arrived at work at approximately 8:30 am, and began my day.  I waited for 9:20 to roll around so I could go downtown and get the mail at the Post Office on 5th Street. I worked at a law firm, and was doing some pretty routine morning activities.  Shortly after 9 am, I was sitting at my desk when my computer blinked off, like it would during a power outage.  It would do this if there was a storm, so my immediate thought was that despite the sun on the drive to work, we must have a storm outside.  It was not necessarily unusual for Oklahoma weather to change in the blink of an eye, especially in April, so I rolled my desk chair back to take a look out the window only to see the bright sun shining outside.  I was confused, and must have had a look of confusion on my face when I looked up at the attorney walking past me, who looked at me strangely and asked, "what?"  Then the earth moved right beneath our feet.

The whole thing must have taken no more than a brief second, but I remember each detail.  The computer going out, the sunny window, the look on the attorney's face, it all seems etched in memory.  Just as the events that followed that are etched in memory.  I froze on the spot.  Everyone around me was moving to the doors.  My office manager, a little feisty woman, was briskly walking past me with her purse in her hand.  She paused at my desk, looked me square in the eye and said, "get up now!"  So I did.  We all assumed, like so many people that day, that it was our building that was in danger, and we needed to evacuate immediately.

I walked into the waiting area of the office, and one of the partners was out there looking out the door at the billowing cloud of smoke coming from the downtown area.  Someone near me said that it looked like it was coming from the hospital complex where my niece was.  I was frantic.  I began trying to call the hospital, but of course could not get through.

The receptionist was doing a stellar job fielding the phones.  As the phones lit up, she would answer, "law office, everyone here is okay, could you hold please."  We began to take inventory of where everyone was.  The Federal Courthouse was right next door to the Murrah Building, and the initial assumption of news and people was that it was the Federal Courthouse.  At that time, I was dating an attorney who did a great deal of federal cases, and so was trying to locate him.  We were trying to make sure we had no one from our firm or the other firms in the building down there.  After we figured out where everyone was, we turned on the television and sat engrossed in the spectacle that unfolded that day. 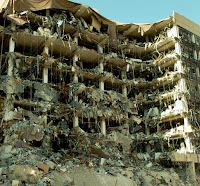 We had no idea what had actually happened.  We had no idea that there was a moving truck involved.  We only knew that there was a bomb that had taken a huge chunk out of the building, like a bite a monster had eaten.  It was simply gone.  The news helicopters were circling the downtown area, but there was no real information available. We were still glued to the television, and were not accomplishing any work that day.

Shortly after that, we were told there was a second bomb, We were torn between whether or not we should stay at work, or leave. Where were we safer?  We soon discovered there was no second bomb, so we closed the office and went home.  As we walked outside, people were walking past our building, bloody and covered in dust, on their way to the nearest hospital. They were all dazed and confused and had no more answers than we did.  What just happened?  Hot water heaters might explode, accidents might happen, but this kind of terrorism simply didn't happen in Oklahoma City.

I remember I was terrified to leave.  I had to drive through downtown.  Was there another bomb elsewhere?  As I reached my vehicle, there was debris around our parking lot.  In fact, a piece of the axle from Ryder truck, was right behind my back bumper.  Just another reminder of how close we were to the explosion.  Our building had been damaged and the concussion had blown out our skylight.

All I wanted to do was see my children, so I drove home.  I saw the chaos that follows such senseless acts of violence.  As I arrived home, my father was watching the news with my three year old daughter and eight year old son. My son could not comprehend what was going on.  It looked like something out of a movie he was not allowed to watch, but here we were watching it.  My little girl kept saying, "that's the building that fell on mommy."  She simply wanted answers, and I simply didn't have any. 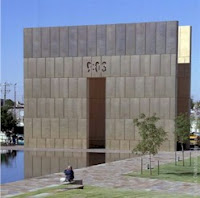 Pretty soon that afternoon, the skies opened up, and the angels began to weep.  Or it began to rain, as the meteorologist would say.  I remember the sound of the thunder scared me to death.  I had problems with handling loud noises for a long time after that, everything from thunder to garage doors slamming shut. 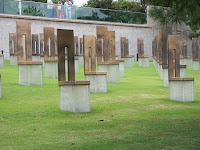 Today, I am sitting watching, as I do every year, the memorial on the television.  Tears stream down my face as I remember all the pain of that day.  Pain for those who lost loved ones.  Pain of those who were injured.  Pain of those whose lives would never be the same.  Pain of innocence lost.

This was a senseless act of violence brought about by misplaced hate.  Tim McVeigh said it was a planned military strike or the equivalent, but what does that mean?  Of course he was a sociopath and hardly is a reasonable source of answers, but it was his insanity that brought all of this around.  What do we have that can combat this kind of hatred, violence, and meanness.  We have love.  When I think of this, I think of God's love and the expression of it in John 3:16-17.

"For God so loved the world that he gave his only Son, so that everyone who believes in him may not perish but may have eternal life. “Indeed, God did not send the Son into the world to condemn the world, but in order that the world might be saved through him." NRSV

Sermon April 18, 2010, on John 21:1-19.  The declaration of Peter's love and Jesus' commandment to feed sheep comes after Jesus' provision of their basic need for nourishment.
at 10:32 PM No comments: