Lessons I'm Learning on Death, Dying and Grief - Part Three - The spirit is willing, but the flesh is strong.

My daddy was always such a strong man.  He was 47 when I was born, so you would have thought he wouldn't have the energy required to keep up with a young and ornery child.  But he managed somehow.  He was the age of a grandpa, but his was a full time job, not just the weekend with the grandkids sort of thing.  That takes a great deal of energy, but he always seemed to manage to come up with it.  I did not, of course, realize until I had children at a reasonable age in my 20s that both of my parents having me later in life were probably tired a lot.

When I was around six (so daddy would be 53), I was playing in the backyard with a Frisbee.  I had an older brother and sister who had moved out of the house by this time, so I was virtually an only child growing up.  I was playing with a Frisbee, but there was no one there to catch it for me, so on one particularly good throw, it went zinging over the fence into the neighbor's back yard.  I did what any child would do.  I went and told my father.  He dutifully went over to the neighbor's house to retrieve the wayward toy.

There was a brick planter box I was standing on by the fence watching my father.  It was about three feet wide, and I was standing on the wall closest to the fence gripping the top railing of the chain link fence.  I was watching dad, but I was then, and I am now, rarely without motion going on of some sort.  I would make my body stiff and let go of the fence and fall back a bit and catch myself - just in the nick of time before I fell back completely.  Well, I'm sure you can imagine what happened - I missed once.  I fell back and my head hit just over the opposite wall of the planter box.  The brick wall cut the back of my neck, just below the base of my skull.  There was quite a bit of blood, and I screamed.  The next thing I know, I saw my father clear that fence and land right beside me.  He picked me up in his arms and carried me into the house, and later took me to the hospital for stitches.

He could leap over chain link fences in a single bound.  He was my knight in shining armor (okay, plaint splattered overalls), and he would rescue me from wasps and bees and killer red ants.  If I were stung by a wasp, you would soon see dad marching purposefully toward their nest with a can of gasoline and a torch!  They better never hurt his little girl! 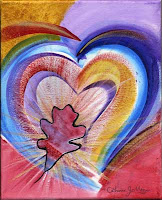 My daddy was always strong, and had a strong heart.  He has traveled by foot over a good part of this country.  He has worked hard his entire life.  So, these recent years that he has been confined to a wheelchair has been difficult to watch.  His world was reduced to a very small apartment and a television set.  The last time he was in a nursing home for physical therapy after a fall we saw a bit of his strong spirit as he would routinely attempt to escape.

As we have sat by his bedside these last few days, his heart is still pretty strong.  His body, as frail as it is, not without some strength.  He also has a strength of spirit that is undaunted by his circumstances.  This past week it is pretty obvious that he is living in two worlds.  He is having conversations with us, and remembers us with little prompting, but he is also including in our conversations other people only he can see.  His mother and brother who died sometime back are there.  There is also a child, who we assume is his sister Patsy who died when she was four.

It has been fascinating to watch the look of awe and wonder on his face as he gazes at the marvels of heaven only he can see.  There is an obvious desire to go to that wonderful and beautiful place, but even in his weakest moments where we think the end is close, if you lay your hand on his chest you will feel a strong and steady heartbeat.  The nurses are amazed that in spite of everything else indicating his transitioning through the stages of the end of life, his heart rate has maintained strength and steadiness.  So while his spirit is willing, his heart indeed is strong.

We have prayed during some of the more laboring points for Jesus just to go ahead and take daddy on to this beautiful place where his loved ones are waiting.  As we were driving home my husband, daughter and I were comparing what God was telling us at this time.  My daughter was getting the word to wait, my husband was hearing, "it's not time."  I was hearing, "not in your time."  It simply wasn't time for him to go then.  His heart was strong.

The time is approaching when Jesus will call to my father and my father will no longer be bound by the confines of an earthly body.  When that day comes, we will celebrate the completion of his journey and wait until it is time for our name to be called.
at 7:57 AM

Email ThisBlogThis!Share to TwitterShare to FacebookShare to Pinterest
Labels: Death

Many of us unfortunately have read horror stories about the funeral business. Regrettably there are companies selling cremation urns online which are not much more reputable. while they spend lavish amounts of money on web sites dripping with sympathy - many of these companies are nothing more than a site that drop ships product. Beware of sellers that do not have a physical address or the names of the principals of the company on the site - what are they hiding from? I had an issue with a company called Perfect Memorials ( Perfectmemorials.com ) and there was no one from the company that would talk to me. while I could call to order an urn - I could not speak to an owner or manager over the phone - they insisted that we only communicate via email. An evasive tactic if I ever saw one! Perfect Memorials is really a company that invested heavily in the web - but puts very little into the human contact part of the funeral/memorial industry. I would be careful of Perfectmemorials.com and others like them.

Wow, I'm just stunned by the beauty of this post.
You communicate your love and admiration and gratitude for your father so well.
Thank you for sharing your conversation with him about his transitioning. It's such a mysterious time, and hearing about his experience is very helpful. And beautiful.
I'll be praying for you and your family. :)